Every New Year many people have make being healthier and more fit a resolution, and I’m no exception. Luckily, there are so many tasty recipes that are both delicious and low in fat that no one ever really needs to feel hungry just to get in shape. One of my favorite ways to cook is to make healthier versions of favorite meals that are traditionally not so low-fat.

We recently have been looking into taking a family trip to Philadelphia for a family road trip, and it put me in mind of one of my favorite treats: Philly Cheese Steaks. I absolutely love them, but I never understood why such fatty meat would be used, when a healthier, less fattening but super tasty cut of meat would be better. My recipe changes out a few typical ingredients and Cooper deli cheese. 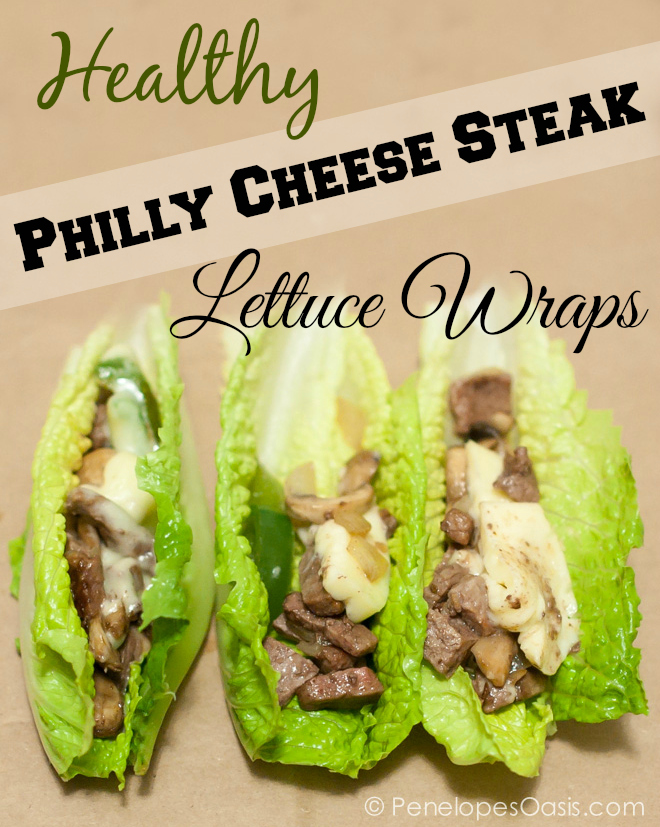 If you never tried Cooper Cheese before, a bit of history about it:

Cooper cheese has been around since 1893, when I.C. Cooper, a prominent banker from Teresa, New York, began selling aged cheese under the Cooper label. In 1945, the Cooper Victory label (C.V. Sharp) was developed in honor of World War II veterans. The Cooper brand was acquired by Schreiber Foods from HP Hood Co. and Mid America Dairymen in 1985, and aside from the wooden boxes previously used, Cooper cheese has not changed throughout the years – not even its packaging. They have remained true to delivering a high-quality product since 1893.

Cooper Cheese is available in three different varieties: White American, Yellow American and Cracked Black Pepper. Even though we’ve all had American cheese, this isn’t your average American cheese. It’s delicious, a bit sharper, full of flavor, and I chose the Cooper White American cheese for this recipe, because it has a wonderfully mild flavor that makes it a popular choice for Philly Cheese Steak sandwiches. 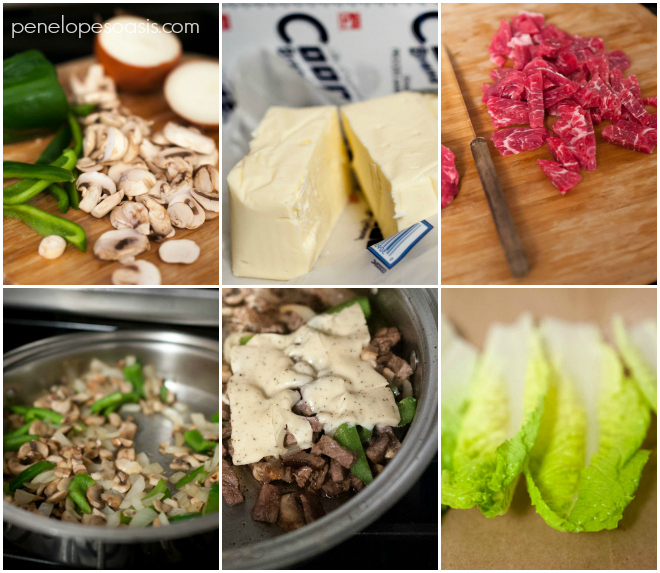 1. Heat olive oil in a large skillet over medium heat. Add onions and cook, stirring until softly caramelized, about 3 minutes. Add mushrooms and pepper, and stir together about 5 minutes. Set aside.
2. In skillet, cook steak until browned to taste (we cooked until well done). Add onion, mushroom, pepper mix back into skillet and stir together.
3. Turn off heat and divide Philly cheese steak mix into sections in skillet. Place a slice of Cooper cheese onto each section and let melt for a couple of minutes.
4. Layer romaine lettuce leaves (two to a wrap) on plate or parchment paper and scoop a portion of Philly cheese steak mixture with cheese into each lettuce wrap. 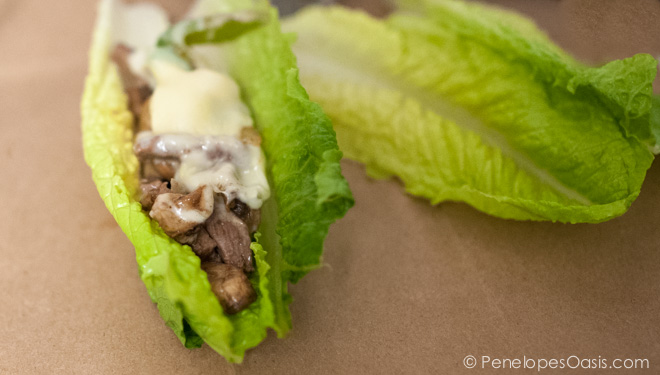 This Philly Cheese Steak lettuce wrap recipe is low carb and lower fat, so if you love Philly Cheese Steaks, you don’t have to go without. My husband asked me to make his with Cooper Crakced Black Pepper cheese for a bit of kick (it’s spicy!) and I went the traditional way for mine. They are delicious. 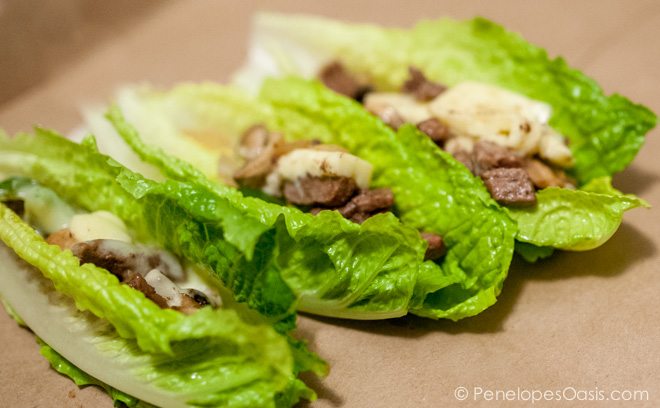 Notes: I used premium black angus tri-tip steak for this recipe because it’s a delicious bottom sirloin cut that is full of flavor, but lower in fat. In order to make it easier to cut the beef cross diagonally, I put the steak in the freezer for 15 minutes before cutting it to firm it up a bit (it makes it much easier).

If you are looking to wrap up these delicious wraps, we used brown parcel paper here.