I’m honored that Penelope’s letting me hang out in her Oasis. I had the privilege of meeting her and her entire family a few weeks ago at BlogHer in NYC and she’s every bit as smiley, witty, and sweet in person as she is on her blog. Anyways, when she asked me if I’d like to guest post on her blog, I jumped at the chance!

I never had a brother of my own, but I do have a wonderful sister. (Shout out to my big sis, Beth!) She’s three years older than me and being a girl, we didn’t really play sports together or anything, but I do remember playing a lot of board games and Atari with her, as well as watching hours and hours of TV. But I have two boys now and there’s just something about siblings of the same gender, especially when they’re both boys. Knowing that Penelope’s got two sons of her own, I figured it’d make for a great guest post. So I put together a list of: 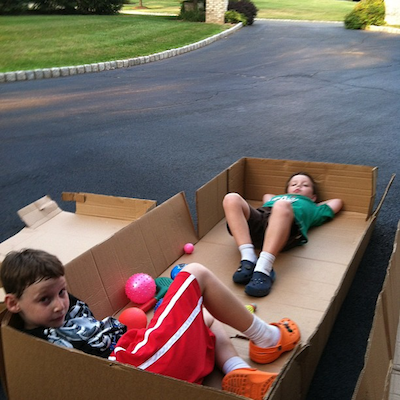 1. No Strawberry Shortcake or My Little Pony – There’s plenty of awful TV to watch with your kids, regardless of their gender (Barney or Teletubbies, anyone?), but thankfully I avoided any My Little Pony or Tinkerbell-type shows. And it’s most definitely genetic, as I never told my kids NOT to watch the more girl-oriented shows; they just scream in horror at them and change the channel. Yes, even Dora.

2. Bathroom breaks – Whether hiking in the woods, out in someone’s backyard, or even pulled over on a long road trip, with boys, it’s just a snap to find a tree and “go tinkle.”

3. Perfect hand-me-downs – From bicycles to baseball mitts to all sorts of clothes, hand-me-downs are so much easier (and cheaper!) when you’ve got two boys!

4. Video Game partners – It took a few years before my youngest son Ryan could hold his own against Jason on the Nintendo Wii. Before that, I was the one suffering through those horribly boring Mario Party games endlessly. Now the two of them entertain each other for hours. Perfect live-in opponents! (And yes, I know girls can play video games too, but in general they seem to lose interest a lot quicker than boys do.)

5. Body Slams– Is there anything more satisfying than watching your two boys play wrestle with each other? Well, at least until someone loses an eye or gets kicked in the crotch.

6. No tea parties – I’m not talking politics here, I’m talking full-on plastic tea sets with a complete set of stuffed animal dining guests. Instead, I get to join in the Super Smash Brother-type battles my kids have with their stuffed animals.

7. Competitiveness – All kids are competitive to some degree. It’s a great skill to learn in life. But there’s just something about two boys that brings out the absolute worst in competitiveness. Like when Ryan sneaks a few extra Hershey Kisses, and Jason feels the urge to tell us about it.

8. Bye Bye, Barbie – I’m so glad I don’t need to scour the racks of Barbie dolls at the local Toys R Us. Instead, I get to pick out Star Wars and superhero figures for my boys. Heck, I even still have a bunch of mine from my own childhood, which my kids love playing with. Again, though, it usually consists of the Avengers battling Darth Vader and crew in a Super Smash Brothers-type battles, complete with Bosses and various levels.

9. Loyalty – They’re still pretty young, but brothers support each other. They may joke around, fight a lot, and make fun of each other… but if someone else starts picking on a boy, you better believe his brother’s gonna be there to back him up.

10. They can’t get pregnant – Unless they’re Arnold Schwarzenegger in Junior, there’s just no way I have to ever worry about my kids getting knocked up.

That’s just 10 of the reasons having two boys totally rocks. Of course, if I had two girls I’d be writing a slightly different blog post. But I don’t. So now I’m off to teach my boys how to shotgun a beer. Kidding! I’m kidding! My wife can teach them that one…

Andrew Kardon is a daddy blogger who writes about his family, video games, comic books, Legos, and more over at Mommy’s Busy… Go Ask Daddy. He’s also a freelance writer and the president of JoeShopping.com, the friendliest coupons and deals site on the web.