As a child I was bullied. At the time it made me feel very small and unprotected, like an outsider, and I wondered what was wrong with me that I was being targeted in this way. Years later I was still sensitive about the things I was teased about as a child.

As a child I was a bully. It was on two occasions, and I was going through a period of low self-confidence, and looking to impress others by picking on someone I felt wouldn’t stand up to me (because, you know, bullies are just so brave). A bully is an insecure person looking for a fleeting ego boost at the expense of an easy target, but the damage they cause to the victim can sometimes be lifelong. I was so ashamed of hurting someone that years later, I went out of my way to apologize to them. Oddly, I felt worse about being a bully than being bullied, and as a result, I also started to stand up to bullies when I saw them targeting someone else.

I think most of us at one point or another have been bullied, but there is a time when bullying is especially painful- when we find out it’s happening to our child. The idea of my children being bullied makes me see red, so much so that I looked up tips on how to handle this properly, because, like many parents, our initial instinctive response may not be the best way to handle the situation. 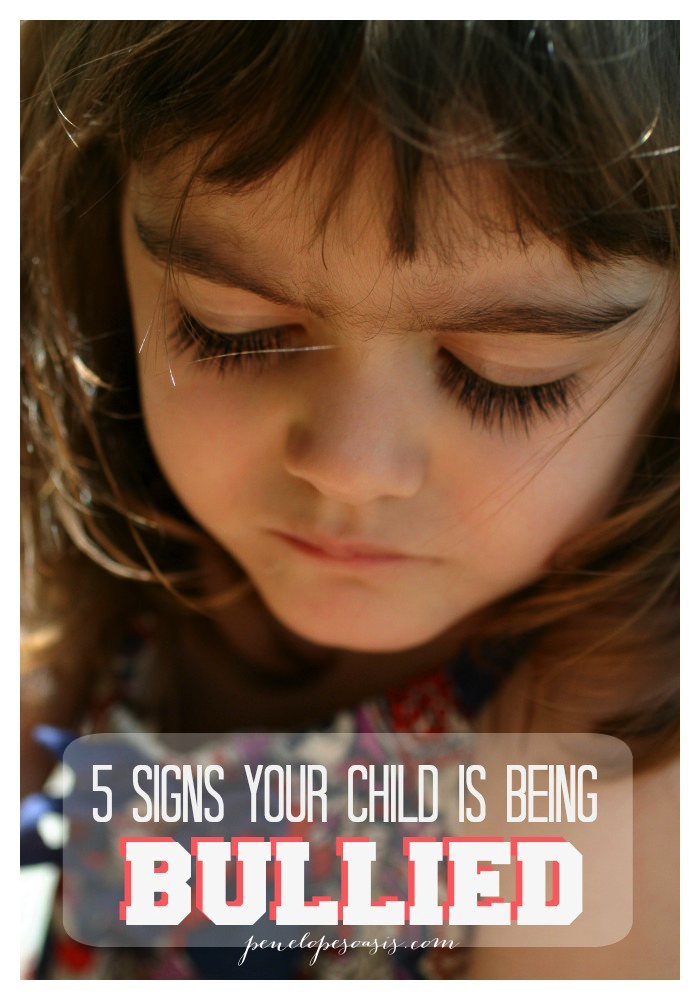 Signs Your Child Is Being Bullied

* Doesn’t want to go to school
* Sudden personality change, seems withdrawn and not as social or interested in usual activities
* Inflicting pain on self
* Secondary sign: Having to go to bathroom once he arrives home (because he avoided the bathroom- a major bullying zone at school- all day)
* Seems hostile in general, and especially toward siblings or younger children

What To Do If Your Child Is Being Bullied

* Let your child know it’s not their fault (don’t ask them if they did anything to cause the teasing or mocking- it will make them feel you blame them), but also be aware you may not have the full story from one side.
* Discuss ideas with your child about ways to handle the bullying.
* Make an appointment with the school to let teachers know about it- often they have no idea it is happening because bullies do it when authority figures are not around. If a teacher is the bully, make an appointment with the principal.
* If there is any hint of physical threats (not just verbal teasing), alert the police- this is a crime.
* After the situation is resolved (and even while it’s happening) take measures to build up your child’s confidence- encourage them to make friends who are kind, participate in activities they excel at, take martial arts so they feel less afraid, etc.

Being bullied, teased, mocked as a child can have lifelong devastating impact on some children, and make them feel insecure, unsafe, unprotected. Some children feel so ashamed and helpless as a result of being mocked and teased that they take their own life to end the torment. It’s important to let victims of bullying know they aren’t powerless and what is happening isn’t their fault, and isn’t ok. It’s also very important we teach our children to treat others with respect, not be a bully, and not stand by while others are bullied (or worse, join in).

Bullying should not be considered a typical stage all kids go through as they grow up, it’s a sign we as parents need to step in and guide our children toward more compassionate treatment of others.