Anniversary Gifts- The Good, The Bad, and The Ugly

Anniversary gifts are often seen as a barometer for a relationship, with romantic presents like jewelry believed to be indicative of a great marriage, and a practical gift of, say, a universal remote control meaning that maybe your husband isn’t feeling that romantic about you at the moment.

Personally, I generally agree with this. I’d much rather get a pair of diamond earring and flowers as anniversary gifts than an exercise bike or a tool kit. I’d wonder what my husband was thinking about if I opened up a grill pan for our anniversary. Actually, I’d know what he was thinking about. Food. For him. On a day he should have been thinking about me.

So I’m one of those gals who thinks anniversary gifts are kind of important.

I get that sometimes finances are tight. I also get that there are women who prefer practical anniversary gifts that are utterly unromantic. But I think they are the exception, women who think a present of sweat pants says “I love you”. I love thoughtful gifts too, like a beautiful eReader cover or girly bike helmet, but for me, those are great for a birthday or “just because”, not something that celebrates the day my husband and I became one. Unless he wants to get me an anklet and the cover too. But just the cover? No no no no. 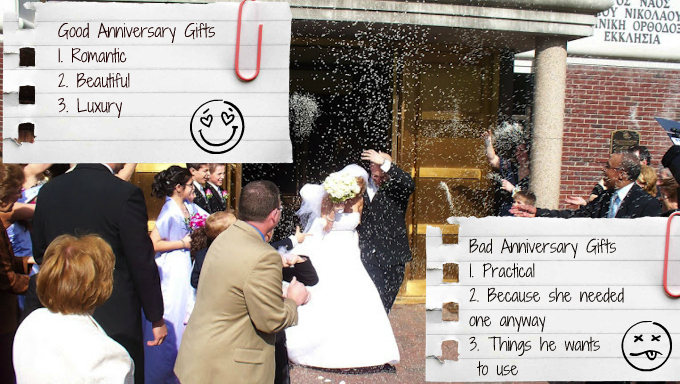 My husband and I have only been married for four years, but he often outdoes himself, especially one year where he surprised me with a white sapphire hearts anklet, a day at the spa, and a romantic dinner, as well as small, sentimental tokens (from a usually non-sentimental guy). It was a great day that made me feel the focus was just on making me happy to be with him, and our love for each other.

The funniest (read: oddest) anniversary gift was the year that, in addition to a gold locket, I opened up a box of Kahlua-flavored cigars. My twice a year cigar-smoking husband explained “You love Kahlua, and said you think cigars smell and taste stinky, so I got you some that you’d like. Now you can smoke with me.” It’s the thought that counts, and I have to admit I loved my Kahlua cigars.

Wonderful anniversaries are important for a happy marriage because it’s something for a couple to look back on and draw from when times becomes harder, finances become tougher, children and busyness comes along, etc. It’s great to build a lifetime of good memories to help keep a marriage strong. A good friend of mine says she never gets anniversary gifts at all, except for the year her husband got her a screw driver so she could fix things around the house herself instead of “bugging him all the time”. It was a pink screw driver, “for girls”, and it’s a good thing she has a great sense of humor, because I think I would have found it less funny than she did!

A new movie, “Hope Springs”, stars Meryl Streep and Tommy Lee Jones (what a great screen pair!) as a couple with a generally happy marriage striving to bring back that spark, with the help of Steve Carrel, their marriage therapist. You know this is going to be a funny movie, great to watch with the husband or friends, and I can not wait to see it. You can click the logo at the top to go to the movie website.

So tell me, what are the best and worst anniversary gifts you’ve ever received?