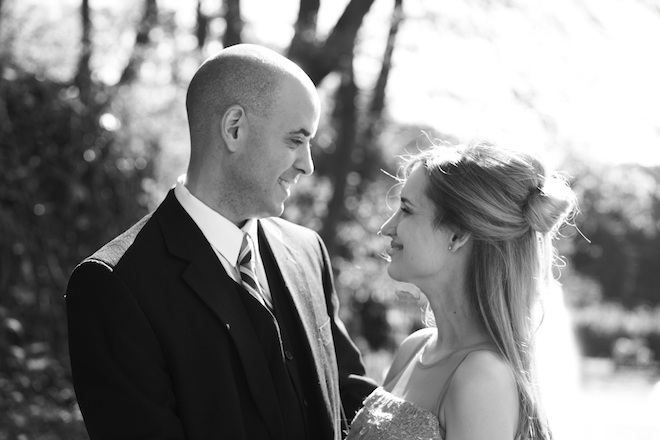 My dad’s parents were married seventy years, and never spent a single day apart except for the time my grandfather was away at war. Their love story started in a time and place that chaperones weren’t enough- a young lady was simply told a man wanted to marry her, and she said yes or no- no chaperoned dates, no time spend alone together, no discussions about dreams and careers and splitting of chores. In those old fashioned times, you simply decided based on what you knew of each others reputations, family, and appearance.

My 19 year old grandfather fell in love with my 19 year old grandmother as he spied her sitting in the back of the church. Back then, all the females sat in the back of the church so they would not distract the men (I guess my grandfather shouldn’t have been peaking behind him then). The old fashioned way of meeting a woman to marry was an introduction through family. He asked his father to ask her father if he could marry her, and her father refused. My grandfather was a hardworking young man, a man of great repute and integrity, but he simply was not tall enough for her, at least in her father’s opinion.

When my grandmother found out this fine young man was in love with her and wanted to marry her, she begged her father to let her, and finally he gave in. They married, and their love story spanned two continents. They had ten children, seven of whom survived difficult village life. My grandfather learned basic medicinal care and became the “doctor” for the poor village, and never spent his days in the cafe like the other men did, but went straight home to help his beloved wife with their many children and farm chores. They loved each other, and when they came to America, even though they were separated from their children by lottery (quotas were set in the 1950’s and lotteries selected the lucky few who would have the opportunity to travel by boat across an ocean to Ellis Island and a new world), they were never separated from each other.

My grandfather passed away at 89. My grandmother became his caretaker in his later years, as his arthritis became almost crippling, and he spent his time sitting in a garden reading the Bible, or taking slow walks with his many grandchildren and wooden cane. After he passed away, she lived to be 99, and quietly passed away herself after a full, adventurous life that lasted almost a century.

I wish I had photos to share of them in their youth, but they did not take photographs, or buy wedding gowns, or really record their history much at all. My grandmother could not read or write, and my grandfather did not think to ever keep a journal. When my grandfather passed away, I asked her to please tell me about her life, as I realized that she wouldn’t be around forever. She told me about the war years, their country being invaded by German soldiers, how they met, stories about their children- my father and aunts and uncles.

To this day I am grateful that I spent the time with her before it was too late. She taught me to knit, and she and my grandfather taught us all what real love was. He was a handsome young boy who at 19 knew he wanted to devote himself and his life to a beautiful, modest, and chaste young woman he spied in the back of a church, and for seventy years they doted on each other and loved us all. Their love story was a gift to us all.