We Finally Entered The Modern Tech Age. And Our Sons Already Have Us Beat.

A month before my second son was born, my husband bought me an iPhone 4S. It was my first smart phone ever, and we got it because I needed a good camera and my seven year old phone took the grainiest pictures ever (evidenced by the disaster we called photos of our first son when he was born). We actually had a camera, but my husband dropped and broke it in the hospital while I was in labor.

We learned two lessons. One: protect our tech gear. Two: Always have a back up.

The iPhone 4S recorded the first days of our second son’s life, and this time we weren’t worried about any accidents, because it was cradled in an Otterbox Defender case (a co-worker of my husband insisted we not only get a case, but it had to be an OtterBox Defender, because said coworker had one and (for fun) tossed the iPhone 3 he was planning to trade in out a second floor window to see what would happen. Nothing happened. These cases are like armor).

And thus, we were ushered into the modern age of technology.

Now I can’t believe I ever lived without a smart phone. I’m up to date on everything, and anything I want to know, communicate, or share can be down right now. My son kept playing with my phone (evidenced by zillions of kiddie apps on it) and because I actually wanted to use my phone too, we got him an iPad. And of course (because lesson learned) an OtterBox Defender case for it. He uses it (and drops it) daily. We haven’t needed to wait two weeks for Apple to fix a screen for us yet, because we won’t put anything in his hands without armor. 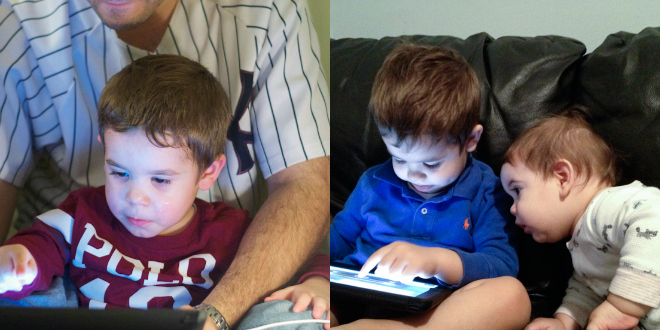 And then our second son came along, and at only ten months he is fascinated by the iPad. He imitates his older brother and pokes at the screen repeatedly with his index finger, watching in fascination as the screen changes. But there is only one iPad, and two boys, and toddlers don’t really like to share. So, enter the mini iPad, for our mini son.

And of course, it’s protected. (with a pretty pink OtterBox Defender case in blush- it’s gorgeous) and with both boys occupied by their high tech gadgets, I finally got my iPhone back. And a new case for it too (midnight blue and black, just my style).